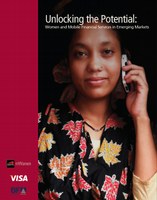 Mobile financial services (MFS) are emerging rapidly in the developing world, with over 150 mobile money deployments live and over 110 more planned worldwide at present. Markets such as Tanzania, Bangladesh and Pakistan are realizing success and are potentially able to replicate the widespread adoption of Safaricom’s M-PESA service in Kenya. Others are still works-in-progress, finding mass adoption and scale elusive. Meanwhile, mobile operators, financial institutions, governments, and other service providers are figuring out how to build attractive and user-friendly services, distribution networks and marketing approaches to embed MFS into their national infrastructures with viable, long term business models. A consistently overlooked theme in these discussions has been women, including their wants and needs for and use of mobile financial services, as well as their critical role in the success of any mobile financial services deployment. This is not a surprise: as the GSMA mWomen Programme notes, there is a gender gap in terms of women’s ownership and use of mobile services generally. Despite the proven role women’s financial inclusion can play in advancing economic development and empowerment, and despite the role mobile might play (in 2012, an estimated 1.7 billion people had a mobile phone but not a bank account), the linkages between women’s financial inclusion and mobile financial services thus far have not been illuminated and elevated for discussion. The objective of this report is to connect these dots in the context of the developing world, based on findings and insights from the experience of women in five countries at different stages of MFS market development: Indonesia, Kenya, Pakistan, Papua New Guinea, and Tanzania.