MAKING IT HAPPEN: TECHNOLOGY, FINANCE AND STATISTICS FOR SUSTAINABLE DEVELOPMENT IN ASIA AND THE PACIFIC 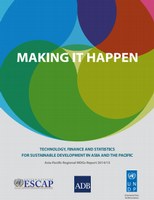 The end of 2015 is the target date for the Millennium Development Goals. Governments across Asia and the Pacific have been striving to meet the Goals, particularly on reducing income poverty. Some subregions and countries have made faster progress than others, but it is clear that the MDGs have prompted high levels of commitment and achievement. As MDGs come to a close and a post-2015 agenda takes shape, to be formulated as the Sustainable Development Goals (SDGs), this report focuses on three key issues for implementation of this new agenda: technology, finance and statistics. It argues that priority should be given to identify and disseminate the most productive technologies; the necessary investment for sustainable development should come from a diverse range of sources, including public and private, domestic and international; and supported by statistics that should serve as a launching pad for evidence-based policymaking. The report has been produced by ESCAP, ADB and UNDP and it is a result of wide consultation among policymakers, development practitioners and other stakeholders throughout the Asia-Pacific Region. Other United Nations organizations, funds and programmes participating in the Regional Coordination Mechanism have also contributed.