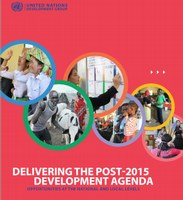 One year ago the United Nations Development Group (UNDG) released a summary of a global consultation process on the world that people want. The report, ‘A Million Voices’, captured the results of nearly 100 national dialogues on post-2015, 11 thematic consultations, and a vibrant e-discussion and global survey, MY World. The current report picks up where 'A Million Voices' left off, and looks in more depth at the factors within each country that will support or impede implementation. A set of Dialogues has been exploring these factors and are still capturing ideas around six topics. The overarching message is that all these means of implementation will require sufficient investment if the new post-2015 development agenda is to make a real difference to people’s lives. Whatever the specific topic of discussion several principlese merge again and again: participation, inclusion, and the need for strengthened capacities and partnerships. Only an agenda that focuses on effective implementation, including through these aspects, will do justice to the aspirations and hopes of the millions of people around the world who have guided governments to this new agenda— the future they want.