Over 350 students, trainers, and educators will gather in Manila for a series of United Nations led events aiming to enhance information and communication technology for development (ICTD) capacity for youth in the Philippines and the ASEAN sub-region.

Organized by UN-APCICT/ESCAP in partnership with the National Computer Institute (NCI), the Information and Communications Technology Office (DOST-ICTO), and the Commission on Higher Education (CHED), the events are part of APCICT’s “Turning Today’s Youth into Tomorrow’s Leaders” programme, which aims to create a cadre of future leaders equipped with the capacity to use ICTs for achieving development goals through enhanced coverage of ICTD topics in institutions of higher learning in the Asia-Pacific region. The five-day schedule will include a combination of technical talks and workshops.

On 24 June, more than 300 students and faculty from secondary and tertiary schools took part in a series of Technical Talks, organized annually by NCI. This year’s Technical Talk is titled, “Empowering the Youth Through ICT” and brought together recognized experts to discuss the significance and impact of ICTs on youth in areas such as social media, ICTs for people with disabilities, mobile applications, robotics and green growth.

Following the Technical Talks, a Training of Trainers (TOT) Workshop will be held for 45 representatives from tertiary institutions in the Philippines as well as throughout the ASEAN sub-region. The workshop will deliver the first two issues of the “Primer Series on ICTD for Youth” (Primer), which was created under the Turning Today’s Youth into Tomorrow’s Leaders project and serves as a tool to help educators fill the gap in ICTD coverage in universities by promoting the addition of ICTD topics into existing university curricula.

“With this series of events on ICT for development, APCICT is taking another important step forward in recognizing youth as development partners of the region,” remarked Dr. Hyeun-Suk Rhee, Director of APCICT.

On 25-26 June, the Workshop will focus on the first Primer, titled, ‘An Introduction to ICT for Development’ and will provide the participants with a preliminary understanding of the linkages between ICTs and the achievement of human development goals in society. On 27-28 June, the workshop will shift focus to the second Primer issue, titled, ‘Project Management and ICTD’, which looks into the use of ICTs in managing projects as well as the tools and techniques in managing ICT for development projects. The second Primer is currently under development and participants will have the opportunity to provide comments before finalizing and printing.

“It is certainly a wonderful opportunity to partner with APCICT to organize a host of events on ICTD here in Manila,” said Mr. Louis Napoleon C. Casambre, Undersecretary of ICTO.“The youth initiatives taking place this week will go a long way towards helping equip the next generation of leaders in the Philippines and the ASEAN sub-region with a greater understanding of the extraordinary power of ICT to improve lives and meet future development goals.”

Officially launched in February 2012 in Baku, Azerbaijan, the Primer Series has been rolled-out in 12 countries/ sub-regions, reaching over 6,500 participants/ students across the region. 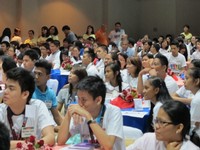 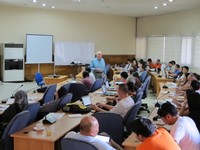 1. Newsbytes-Gov’t project to promote ICT for dev’t in universities