APCICT provides training on 'ICT for Disaster Risk Management, 'ICT, Climate Change and Green Growth', 'Social Media for Development', and 'An Introduction to ICT for Development' to government officials and academics in Romit, Tajikistan.

On 20-23 August, APCICT organized a training of trainers (TOT) workshop on the 'Academy of ICT Essentials for Government Leaders' (Academy) and the 'Primer Series on ICTD for Youth' (Primer Series) in partnership with Open Society Institute Assistance Foundation and the Association of Internet Service Providers of Tajikistan. Consisting of three parallel tracks, the workshop delivered training on three modules of the Academy and the first issue of the Primer Series.

While the first track covered Primer Series Issue 1, “An Introduction to ICT for Development”, the second and third tracks delivered ‘ICT for Disaster Risk Management’ (Module 9) and ‘ICT, Climate Change and Green Growth’ (Module 10), and “Social Media for Development (Module 11). The workshop was attended by around 50 government officials, university faculty members, and media professionals from Tajikistan including 1 participants from Turkmenistan.

The Academy and the Primer Series are APCICT’s flagship training programmes designed to impart requisite knowledge for leveraging the potential of ICTs for achieving national development goals. While the Primer Series aims to serve as a tool to help educators fill the current gap in ICTD coverage in universities, the Academy is designed to equip government officials with requisite knowledge and skills for ICTD.

The workshop provided participants with necessary training to enable them to serve as resource persons and champions of the Academy and the Primer Series in Tajikistan and Turkmenistan. Participants also had the opportunity to provide feedback on Primer Series 3 - ‘ICT for Disaster Risk Management, and Primer Series 4 - ‘An Introduction to ICT, Climate Change and Green Growth’ which are currently under development.

In addition, side events to the workshop were organized across the country to further promote ICT for Development (ICT4D). A series of lectures on Primer Series 1 were held on 24-28 August 2013 at universities interested in taking up ICT4D in their training curricula in three cities of Tajikistan, namely, Dushanbe, Khujand, and Kulob. The lectures was delivered by Dr. Usha Reddi, the author of Primer Series 1. The side events are expected to help further engage youth in ICT4D and promote the integration of ICT4D in university curricula in Tajikistan.

The Open Society Institute-Assistance Foundation (OSI-AF) is a local partner of APCICT that has been leading the roll-out of the Academy and Primer Series in Tajikistan. OSI-AF launched the localization of the Academy into Russian in 2009, and into Tajik language in 2011. Following the launch, the second Academy workshop was co-organized on 14-18 September 2011 by APCICT and OSI-AF in Tajikistan for Academy modules 3, 7 and 8. Following this training, OSI-AF has carried out three additional Academy workshops at the provincial level. In addition, OSI-AF completed the localization of the Primer Series into Tajik language, and officially launched the localized version in 5 major cities of Tajikistan starting in January 2013. Furthermore, the Institute of Entrepreneurship and Service launched a pilot undergraduate course in early 2013 utilizing the Primer Series. Plans to include Primer content in 5 additional faculties are underway in Tajikistan. 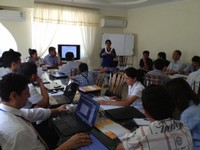